School of Radiology of the Polish Medical Society of Radiology (PLTR) was launched in 2001, following the initiative of Prof. Andrzej Marciński (then the President of PLTR Board of Directors), Prof. Bogdan Pruszyński and Prof. Jerzy Walecki. It was intended to facilitate access to education mainly for physicians specialising in radiology. The first two courses were organised in Falenty near Warsaw, then starting from 2002, the events were held in Kielce. An invaluable role in the functioning of the school in Kielce was played by its secretary, Jacek Heciak, PhD, who coordinated logistical activities on site. The consecutive events organised by the School focused on diagnostic imaging of the specific body systems, in line with the specialist training program. The lecturers included the most renowned Polish radiologists. On each occasion the lectures were attended by a few hundred medical professionals. These included mainly resident physicians doing specialist training (they could attend free-of-charge), as well as specialists in radiology, diagnostic imaging and other medical disciplines.

In 2018 and 2019,  PLTR School of Radiology organised the courses jointly with the University of Kielce which had launched its College of Medicine. To enable efficient management, the School implemented a computer system, to be used for keeping the archives and day-to-day operations.

Activities of the School were monitored through surveys completed by those attending the courses. The final survey conducted in 2018 showed very good opinions about the School:

Opinion – all presentations are highly valuable  81,5%

Opinion – only some presentations are conducted adequately  18,5%

Opinion – the presentations are conducted inadequately 0%

From 2020 the courses of PLTR School of Radiology were organised in Łódź. Due to the COVID-19 pandemic, from 2020 the operations of the School were carried out online.

In September 2022 the Board of Directors of the Polish Medical Society of Radiology decided to discontinue the operations of the School. However, the decision brought about a negative response from the community of radiologists. Because of this, in December 2022 the decision was taken to relaunch the School of Radiology, in a new format. It was determined the school would organise, at least once a year in Łódź, non-mandatory on-site courses, intended for both specialists and residents. It was also announced, the prices of the courses were to be maintained at a low level.

In October 2011, during Covidien scientific conference in Istanbul, Professor Andrzej Urbanik (then the Vice-President of the Polish Medical Society of Radiology - PLTR), in the presence of his colleagues from PLTR, presented a proposal to Professor Andreas Palko (then President of the European Society of Radiology - ESR); in line with that proposal, efforts were to be initiated for European Diploma in Radiology (EDiR) to be recognised by the relevant authorities as equivalent to Polish specialisation examination in radiology. Professor Palko accepted the proposal and, owing to his efforts, the European Society of Radiology reached an agreement with PLTR, which was then approved by the Polish Minister of Health. From 2012, the title of specialist in radiology in Poland can be obtained by passing either the state exam in radiology (as before) or the European Diploma in Radiology (EDiR).

As a result of these efforts, Poland was the first country to adopt this approach. The main objective for Prof. Urbanik was to have the Polish radiologists integrated as closely as possible with the European radiology community. Furthermore, a success of this solution (i.e. high attendance at EDiR exams), would show that the approach could be introduced in other European countries. This in turn would be an important step towards introducing EDiR as a formal examination in radiology recognised throughout Europe. It appears that the concept was correct, as shown by the fact that, starting from 2012, Poles have been the largest group taking EDiR exams. In fact, EDiR exam sessions were organised in Poland twice, in 2014 and 2015. However, this initiative was not continued due to the high costs. In 2016, the Ministry of Health  carried out a review assessing compatibility of EDiR and the state exam in radiology. Based on the opinion prepared by Prof. Andrzej Urbanik (then president of PLTR), the existing arrangement was sustained. The procedure of EDiR exams was changed due to the Covid-19 pandemic. In 2020, the European Society of Radiology decided to carry out online EDiR exams in a few countries. In Poland, online EDiR session was held in nine locations (Gdańsk, Katowice, Kraków, Poznań, Rzeszów, Szczecin, Warszawa, Wrocław, Zabrze) on 17 and 18 July 2020. A total of 104 candidates took the exam. As a result of this successful experiment, EDiR exams are again organised in Poland, this time in an online system.

In 2022, greater cooperation between ESR and PLTR related to EDiR was initiated. A special educational package comprising some practice options on offer from European Board of Radiology (EBR) was prepared for residents of Poland taking EDiR exam; these include:

- 1 EDiR Simulation & Webinar (a short version of the EDiR examination)

Research clubs for students of radiology in Poland

Many medical universities in Poland are home to radiology research clubs, associating both medical students and student radiographers. Their members aim to present their accomplishments during scientific conferences. Most related student science conferences in Poland include radiology sessions. Furthermore, special sessions for university students are also held during events organised by Polish Medical Society of Radiology and radiographers' societies. Most importantly, however, some student science conferences organised each year are dedicated exclusively to radiology, and can be attended by medical students, student radiographers and students of medical physics and engineering.

The latter events include:

organised by students of the Medical University of Warsaw since 2015. The main prize is a free-of-charge admission to the European Congress of Radiology in Vienna (the prize is financed by Polradiologia Viva Foundation)

organised by students of the College of Medical Sciences at the University of Rzeszów since 2013. The main prize is a free-of-charge admission to the European Congress of Radiology in Vienna (the prize is financed by Polradiologia Viva Foundation).

organised by Resonnez School of Radiology in Poznań since 2020.
https://resonnez.eu

Rapid technological advancements have been taking place in radiology for many years. These changes must be taken into account in educational courses designed for medical students and student radiographers. Based on their experience, Prof. Andrzej Urbanik and Prof. Robert Chrzan, members of the Chair of Radiology at Collegium Medicum, Jagiellonian University, published an article in which they described the practices introduced in their University and at the College of Medical Sciences at the University of Rzeszów. They demonstrated a need for highly secure radiology laboratories with fully operational radiological equipment, where real-time imaging examinations of phantoms could be performed. The authors suggested that in order to keep the related costs down, such facilities could use second-hand equipment removed from service, but in working condition. Furthermore, laboratories with simple diagnostic radiology workstations should also be created, to make it possible for students to access a large pool of anonymised imaging measures, and to perform simple processing of imaging data. The article also described how to use generally available free software. It was also emphasised there was a need for ultrasound laboratories where students could acquire skills first by examining one another, and then by using special imaging phantoms for this purpose. 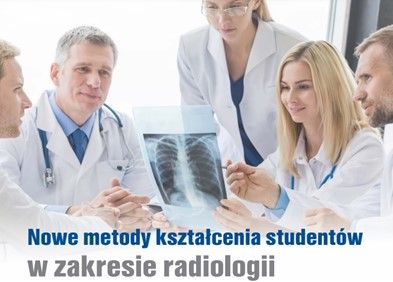 Ultrasound in medical education in Poland

The necessity to incorporate ultrasound training into medical education is unquestionable. In Polish schools of medicine, this type of training is organised in various ways, however the teaching curricula always include ultrasound theory. Practical training is more problematic and is not fully implemented at all medical schools. Because of this, Chair of Radiology at Collegium Medicum, Jagiellonian University, based on its experience, and in collaboration with Polradiologia Viva foundation, promotes the idea of creating educational ultrasound laboratories and incorporating practical training into the curricula of radiology courses. In order to speed up this process, in 2021 the two institutions organised a nationwide training course in ultrasound, intended for medical students (The Course ABC-USG). The course, which could be attended free-of-charge, was to enable the first practical encounter with ultrasound, so it was mainly designed to teach the basics of this imaging technique and to show a normal view inside the body, in the area of the abdomen/pelvis and neck. The course was very successful and the feedback from the participants showed a need for other events of this type. Based on the experiences gained owing to the course ABC-USG, the Polish Ultrasound Society designated a special group called SonoTeam, to conduct ultrasound training for students, and the first course was organised in December 2022. As a result of these efforts, practical ultrasound training should be commonly available to medical students in Poland. 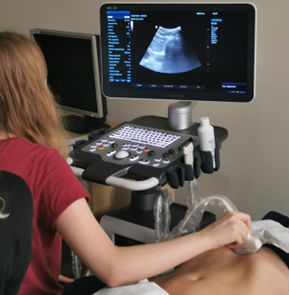 This is an educational website of the Polish Medical Society of Radiology (PLTR), designed to provide a platform for members of PLTR to share their current knowledge related to radiology and diagnostic imaging. It was launched by radiologists from the Warsaw branch of PLTR. Online lectures are addressed to residents as well as experienced radiologists wanting to improve their expertise. The lecturers are radiologists and radiology residents. 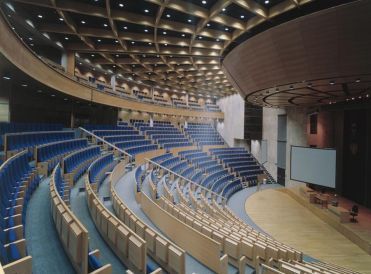 How to organise an online scientific conference

After the outbreak of the Covid-19 pandemic, a lockdown was introduced in Poland on 16 March 2020. As a result, it was impossible to organise onsite scientific conferences, and any meetings had to be held via the Internet. To make it easier to organise events of this type, Polradiologia Viva Foundation compiled and posted instructions on www.inforadiologia.pl presenting a simple way to organise an e-conference (the instructions could also be used to prepare an e-lecture). Based on that, the first online radiology conference in Poland was organised, and held as early as 4 April. The conference Young Electroradiology was organised by students of the College of Medical Sciences at the University of Rzeszów, with a support from  Polradiologia Viva Foundation.

Practice version of the Polish Specialisation Examination in Radiology 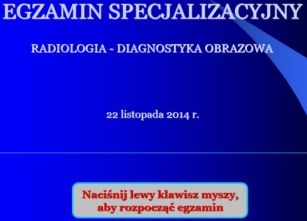